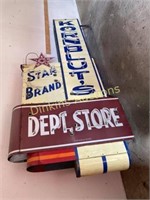 Neon Sign came from Latta SC. MUST BE PICKED UP IN SUMTER SC BUYER IS RESPONSIBLE FOR LOADING AND MOVING SIGN **Opened by merchant Abraham Schafer of Little Rock, South Carolina, the Latta Dry Goods Company operated out of the same building as the Latta Hotel. In 1906, Abraham’s daughter, Lizzie, and her husband, Leon Kornblut, assumed management, and advertised the business as “Leaders in Ladies and Gents Furnishings.” Like other Jewish merchants, the store initially purchased wholesale goods from Baltimore Bargain House. Around 1910 a two-story building was built at 103 E Main Street. The upstairs was used for storage and was accessed using a hand-operated freight elevator. Half of the building was leased to Gaddy Drug Company as a pharmacy that operated until the late 1940s, when Kornblut’s expanded into that space for its women’s department. Around 1927, Kornblut partnered with his brother-in-law, Isadore Blum, to operate several more stores in towns across South Carolina, including Marion, Mullins, Cheraw, Chesterfield, and Lake C, although they closed shortly before the Great Depression. During this time the store in Latta was called Blum and Kornblut’s. Latta Dry Goods Company later became Kornblut’s Department Store, with locations in both Latta and Dillon. Their sons, Moses and Sigmond, joined the business and eventually took over the remaining two locations. Moses ran the store in Latta from 1966 until his death in 2009. His son, Harold, and daughter-in-law, Susan, kept the store open for another year, before closing it in 2010. In 1998, the Kornblut’s Department Store building was listed in the National Register of Historic Places as a contributing property in the Latta Downtown Historic District.
Bidding Notice: SIGN IS LOCATED IN SUMTER SC BUYER IS RESPONSIBLE FOR LOADING and MOVING SIGN!
Location
Sumter, SC
Details
Auction Details
Catalog
View Catalog (2 Lots)
Single Page

No bids found for this item

In the case of a tie bid, precedence is given to the earliest bid

Your Max Your Bid

Your Max Your Bid

Your Max Your Bid
Click to add notes.
Notes saved

Email Privacy Policy We have created this email privacy policy to demonstrate our firm commitment to your privacy and the protection of your information. Why did you receive an email from us? If you received a mailing from us, (a) your email address is either listed with us as someone who has expressly shared this address for the purpose of receiving information in the future ("opt-in"), or (b) you have registered or purchased or otherwise have an existing relationship with us. We respect your time and attention by controlling the frequency of our mailings. How we protect your privacy We use security measures to protect against the loss, misuse and alteration of data used by our system. Sharing and Usage We will never share, sell, or rent individual personal information with anyone without your advance permission or unless ordered by a court of law. Information submitted to us is only available to employees managing this information for purposes of contacting you or sending you emails based on your request for information and to contracted service providers for purposes of providing services relating to our communications with you.

The email address {0} has been subscribed to the email list.

Oops, there was a problem.

I was unable to add your email address to the email list. Please check your address and try again.

Oops, there was a problem.